February 28, 2008
Delhi-based performing artist of Iraqi origin Al Saidi Hassan, performed ADAM FEET, during a group exhibition of various artist at , Noida on . Curated by Marta Jakimowicz, the exhibition was entitled as “The Mechanism of Motion”. 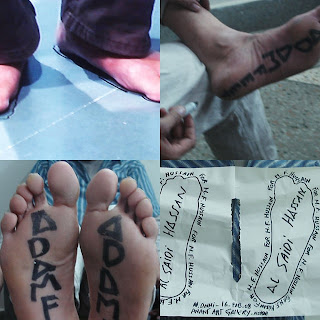 
In ADAM FEET, Al Saidi Hassan tried to raise issues of fragility, hostility and vulnerability related to the Freedom in Art in the contemporary Art scenario that prevails in post-colonial . The performance was aimed at challenging the growing intolerance for the diversity of positions on a particular issue, even in the circles of the artists.

Using the performance as a medium of expression, Al Saidi, a member of the Progressive Artists Group, made an effort to articulate the concerns of those artists who are kept at margins and who often go unheard. It also asserts the right of artists to live a life characterized with dignity, equality and justice.

After being forced to conform orders of ‘the other’ and also being denied the right to air his voice as he desired, Al Saidi, the rebellious artist, decided to make his own contribution to the Art Freedom, in support of M.F.Hussain episode. .

For Al Saidi, the lack of freedom at the Vivian Sundram Documentary Interact Performance made the latter a clone of: ‘The US Artist Fantasy in Vivian Artistic Philosophy’, designed to rule the scenario in the exhibition. “I am a comedian target and was forced to join Action against another comedian, in taking side with self-censorship by removing my drawing from the sketchbook. Thus, I am always ready to give the M.F.Hussain case an embrace even though he enjoys security in the Arabia Filics (Dubai)and have “Al Dorado Life Style” as a refugee in exile while there is nobody to protect me or support me in my struggle for my survival as an artist in India, says the Iraqi artist. He further describes the Interactive Vivan Performance as “unfortunate” because it did not allow him to give a free opinion in support of Hussain.

Through the ADAM FEET, Al Saidi made the point that it was drawings and names of artists which lent a colour of sacredness to the Vivian Sketch Book. By the same logic, he questions what was being practiced at the Vivan Performance as it also tantamount to denying the artists the freedom and space to express in the way they wanted.

As there is no public explanation; I feel no safe to my work in his hand. Also, I do not know to which collector or our work he will sell to; which is different from drawing my feet on the gallery pavement; and I found it genuinely valid as no one can carry the pavement with him-only Saddam Hussain during the 1992 invasion.

“I felt in peace in ADAM FEET performance because it symbolised origin of us all, and also because my performance was not motivated by any politico-capital interest”, says Al Saidi. A colonial mindset seems to lurk beneath the contemporary Indian art culture. He accuses the mindset to try to keep ‘others’ silent in. He wonders that such praxis are still in vogue despite the fact that all of us come into existence as a result of the multiple of intermixing among origins, ethnicities, races and classes.

Al Saidi said on the occasion: “I know what I am doing. I am not stealing or confusing art. Though my idiom is different, I also am protesting and in the process, I am not masking action or manipulating the motivation, to communicate a higher truth, regarding the conceptual bankruptcy of the political culture and ideology”. He is of the opinion that it is this Racist Culture which is instrumental in perpetuating bad living condition of many artists who are left on the margin of galleries as they do get hardly get someone to buy their artworks. Ironically, it coincides with the boom in the domestic market.

Al Saidi’s anger as symbolized in ADAM FEET heightens the sense of survival crisis which pervades the circle of non-elite artists. Is it sane in this backdrop to hold only the Political Right responsible for incidents which bear similarity to the Hussain episode? One should recall justice for the trauma; the fundamental purpose of ADAM FEET.

Posted by Rahul Bhattacharya at 10:15 AM