'hello, is there anybody in there? Just nod if you can hear me’ 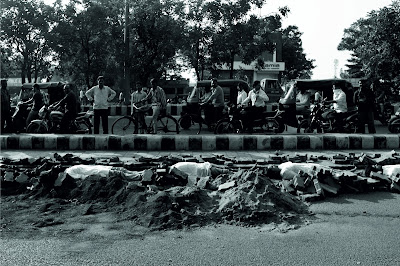 Though this blog is not a platform for performance reviews...i felt like visiting this one .
Sanket Jadia 's performance intervention in the city of surat is a bit historic ...it the first of its kind in the demography of Surat ...a city where Art as noun and metaphor is struggling to find it's footing.
Not only that Sanket is a final year painting student at the Fine Arts College of Veer Narmad South Gujarat University    an institution almost completely unknown to the world of Contemporary Indian Art.

.  Though the written concept note (pasted at the end of the post) seems naive , but the photographs that came through spoke of a mature sense of performance and performativity.

essentially a simple reaction to the space, distortions of the cityscape through construction work , Sanket's work .'hello, is there anybody in there? Just nod if you can hear me’ uses the tropes of digging and burial (using under construction road dividers as ready made props)  to string a poetry about urbanization and resulting alienation in the fast changing Surat.
The understanding of props and performativity struck me as being very mature for a first time performance, specially since it involved choreographing a group. Thet guerrilla mode  opens up directions for futher performative interventions .

‘Every individual is a cosmos or chaos of desires, emotions and ideas’.
Plato

One exists before his birth and remains to exist after his death; the period between these two is its ‘Ephemeral state’. Hence this period demands a purpose and throughout the period only the beginning i.e. the birth is innocent and devoid of everything. Thenceforth you are introduced to complex intertwining webs of expectations and responsibilities, spending the rest of your life ravelling it. Couple of work tries to understand the notion of individual’s existence both in contrast to each other; one within the limits of the society and other beyond its confined boundaries.

Medium does not become a barrier for me as far as implicating of the idea is concerned.  Just an intuition led me to perform this particular act. It explores the nature of being in the state of subsistence and during the state of nihility. I believe that two kinds of people exist in the world: one who searches for his existence and other who is trying to prove that he exists. Life is episodic, but the very end of it makes it perennial.


Posted by rahul bhattacharya at 1:32 PM