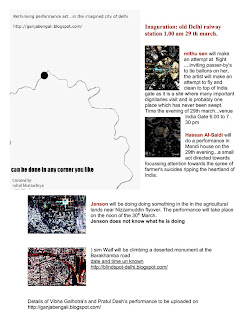 the inauguration ceremony took place at a deserted car park in the station premises. a stubborn candel was lit to formalise the informal.

mithu Sen's performance is now to be held on the 2nd of april...wednesday

Artmaharaj: INSECURITY GUARD'S tie was castrated during his performance at the anant art gallery as a part of Khoj live.
today at 4 pm, he will tie the castrated tie on the gates of the british council ( kasturba gandhi road-Connaught Place), and hold on the railings...waiting to be rescued. date : 29th march 2008

Hassan Al-Saidi will do a performance in mandi house on the 29th evening...a small act directed towards focussing attention towards the spree of farmer's suicides ripping the heartland of india. 5.00 pm . mandi house lawns. date : 29th march
Posted by Rahul Bhattacharya at 4:59 AM